For 12½ years, Mark Weeden was Pastor of the Worthing Tabernacle in West Sussex, a church noted for its emphasis on Bible teaching and Missions. Before that he was Pastor of Lechlade Baptist Church in the Cotswolds. He also had a period of itinerancy amongst differing denominations in the Greater London area, during which time the seeds of this international ministry were sown. 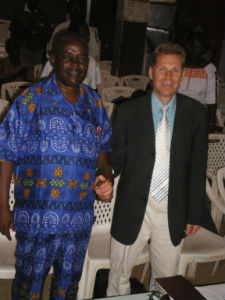 Living Word Ministries adheres to the FIEC Statement of Faith, which can be found on their website www.fiec.org.uk

It unequivocally believes that the Bible is the inspired, infallible and inerrant Word of God.

The Birth of Living Word

Whilst in the pastorate at Worthing Tabernacle, the Lord gave Pastor Mark

This was confirmed several ways, and also given independently to Jane, and then

the Lord clearly gave Mark the Great Commission.  Whilst meditating at length on it one Sunday afternoon, unexpectedly, and in a very unusual way, it was publicly given to Mark in the evening service.

More specifically, Isaiah 49:6 was highlighted, and then confirmed.

Interestingly, this had been given to him over fourteen years ago, but had never been shared with anyone else.

Superintendent of the Baptist Churches in the London area, Douglas McBain had it laid on his heart in prayer to give to Mark, whom he was to meet for the first time later that day.

Within a few months, Mark's first ministry opportunity abroad opened up and has continued ever since.