A team of six went to Kisumu, to help with construction at the orphanage, nursing care in the prisons as well as for others, children’s ministry, worship, as well as teaching at pastors’ conferences and some evangelism. Materials were bought locally, and the older teenage orphans enlisted to help with putting up fencing around the orphanage, repairing a well, and installing a 5,000 litre water tank to collect rainwater off the corrugated iron roof.

The main focus of this trip was two three-day Pastors’ Conferences, in the Livingstone region, which saw over 160 attendees, and many showings of the Jesus film in rural or township area, alongside preaching the Gospel and calling for a response. 499 people made professions of faith on the trip, and were encouraged to start attending the local churches, whose pastors or other leaders were there to follow up. Of course, only God knows how many genuine conversions there are, but in Africa, people see their need of God much more keenly than we Westerners.

An old age home was visited, which was a very sad experience (so far from Western conditions and standards) and some practical help brought, which seemed pitifully little in light of the needs.

Travelling at night is not wise in many parts of Africa, but is sometimes necessary and unavoidable if ministry is to occur. There were times during this when the Lord’s peaceful presence was so amazingly real.

This trip's ministry focused on teaching pastors and leaders in and around the capital, Harare.
Here, as in many African countries, leadership training is seen as the biggest need, along with bringing
in sound doctrinal teaching, in the midst of much false prophetic and prosperity gospel claims. 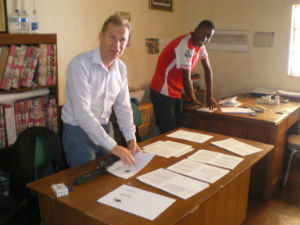 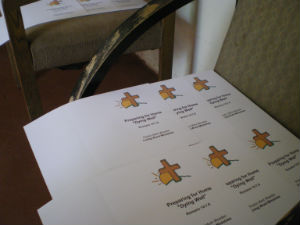 The work of sermon booklet production began in January was continued, producing more titles.
These are printed in English, and also translated by a local pastor into Shona, and printed in that
language too. Another local pastor has become adept in producing booklets, and boxes of copier
paper and ink were supplied to ensure copies continued to be run off after Mark returned home.
Whilst there, some 700 booklets were made available to the denomination.
Also, by God's grace, a hundred Shona Bibles were donated for distribution to their rural churches.
These were to be shared between about forty different churches, such is the paucity of Bibles in the
villages.
In leadership conferences, an emphasis on the Great Commission is frequently encouraged, that the
Kingdom of God may continue to extend. Matthew 28:18-20; Mark 16:15-18; Luke 24:46-47; John 17:18; 20:21. 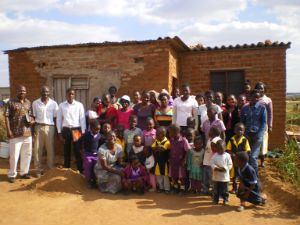 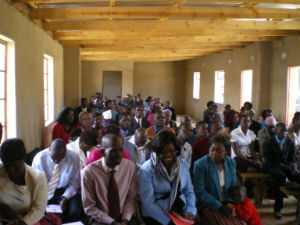 By God’s grace this trip was the first ministering in multiple nations - Malawi, Zimbabwe and Mozambique. The feel of each country was noticeably different, which should not be a surprise when we consider Paul’s teaching on spiritual realities. (Eph 6:10-20)

Many significant things occurred in answer to prayers; rain pouring down to break the drought in southern Malawi was an amazing and tangible one. 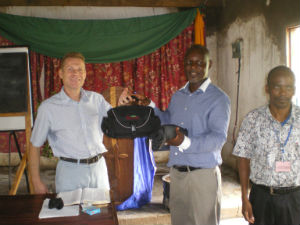 MALAWI - A leadership seminar at Jesus Way School of Evangelism saw local pastors come together in unity to plan a Gospel crusade in their local area, the first time this has ever happened, according to the school’s director. They were also thrilled to receive a solar-powered projector (see photo left). There is a widespread recognition that churches are not sufficiently involved in outreach. Whilst there was only one Jesus film show, many pastors were stirred to respond to the challenge of the Great Commission, particularly at one meeting when about 60 responded to the appeal. Another pastors’ conference was a special time to share about the problems and pressures of the ministry, seeing a renewal in many of the pastors’ lives. 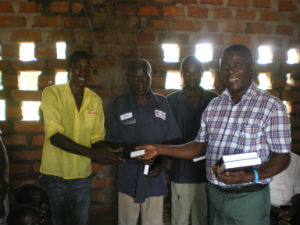 MOZAMBIQUE – Still struggling with the after-effects of civil war in the 1990s, and communism, with bandits roaming the country, our drive over the border showed the desperate situation in which local people live in the rural areas. Taking Bibles to a run-down church seemed so little to be able to do, yet it is still God’s Word which is the most valuable item in this world. 17 pastors and evangelists gathered for this occasion, with host Lapson Mbewe (giving out Bibles in photo above) returning to another area on 29th January to distribute to other churches. 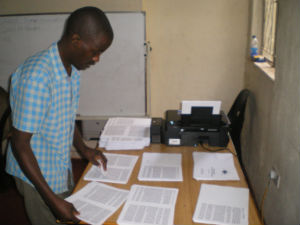 ZIMBABWE - How can ministry be multiplied? Through the good old printing press! Its invention in the mid-15th century was the spur to the Reformation spreading so quickly.  Purchasing a printer locally in Harare, as well as boxes of copier paper and ink, Mark set about printing copies of sermon booklets in Shona. Eternal Word Ministries have 150 pastors for their 585 churches, and Elders who seek to lead when pastors cannot visit. With resources being scarce, copies of a series on the Compound Names of God - doctrine in a devotional setting - were printed for each pastor.  A young pastor, Tapuwa (in photo, above) was trained up in the process, so that he could continue producing booklets for the Elders.  The pastors will be using the booklets for personal group study, as well sharing with their congregations. Pastor Israel will continue to translate other booklets, thanks to a laptop donated to him.