Africa Living Word Ministries is the hub of LWM’s ministry in Western Kenya, run by two local missionary pastors, Nashon Ooko and George Odour (pictured). They organised a number of conferences in Kisumu, and further north in more rural areas, and with the orphanage at Seme. It was encouraging to see the progress maintained by the team’s efforts from just over a year earlier, and how the pawpaw trees (papaya) had taken root and begun to flourish. They are pleased that they now have clean water to drink, and a well that is safe. 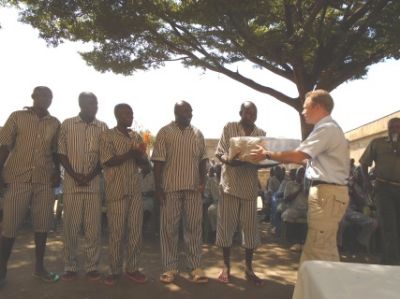 The most striking parts of the trip were what the Lord is doing in some of the prisons. Inmates, many of whom are there for capital crimes, are clearly finding the Lord, and growing in their salvation. In two of the three prison visits, the Holy Spirit’s presence was so powerful, making ministry there easy. Conditions are very, very basic, and far from what would be considered the prisoners’ “rights” in the West. Gifts were taken in for the prisoners – toilet rolls and soap – which are always gratefully received. It’s what they really need! About 1,500 rolls were donated in all, and an equivalent amount of soap, and then Bibles and Christian materials for pastors, and food for orphans.

Visiting Israel for the first time was a profound experience. To actually see the settings of many of the events described in the Bible adds colour and depth to accounts of those events. The team saw Syria and Lebanon from the top of Mount Hermon, and appreciated the strategic significance of the Golan Heights. Whoever controls this has a stronghold for either attack, or defence! We stood where Jesus Christ asked the immortal question, “Who do men say that I am?” at Caesarea Philippi, which of course comes down to you and me, through His turning to the disciples and applying it personally: “Who do you say that I am?”

Many other sites were of great interest, such as Nazareth, Megiddo, Masada, the Dead Sea and others.

Most sobering, however, is what few have done on their visit to this extraordinary land; we stood on ancient Gomorrah, one of the sites of God’s judgment, as recorded in Genesis 19. There was an eerie silence, as we saw the sulphur remains (biblical brimstone) and felt the ash. In many places we could hear that the ground was hollow underneath. Remember, it was a city full of buildings that was instantly judged.

How wonderful to be in Jerusalem, the place of another sobering judgment; this time upon the Son of God Himself, when he went to the cross for our sins. Jerusalem – the “City of Peace” – where a humble sinner can find forgiveness with God, and an escape from the judgment to come, because of Jesus’ atoning sacrifice. Thank You Jesus! 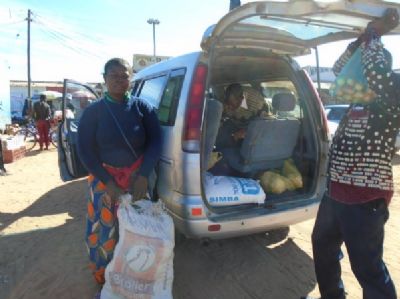 This Mission trip had its major focus near the border of the Democratic Republic of Congo, in the town of Serenje and the Chitambo district (near where David Livingstone’s heart is buried.)

The pastors’ conferences were well attended, with teaching on one’s personal life as well as doctrine. In that region the Jehovah’s Witnesses’ presence is strong, so teaching on why we believe the Trinity was very well received. The prosperity gospel continues to be a major problem, as in much of Africa, and it has to be refuted biblically, with such passages as Hebrew 11:33-39 and Philippians 4:10-14.

It is always a profound experience, involved in Gospel outreaches, to be outdoors under the stars, seeing the Creator (Jesus was also involved - John 1:1-3; Col 1:16-17) willing to come to earth, and die on a tree He made.

Many Western Christians question the reality of Africans’ response to the Gospel, but they live in a completely different environment to us. They see their need of God, often daily, without all the supports and securities we have in a developed economy. After one crusade, the next day four older teenage boys left school to come to the conference venue to thank Mark for sharing the Good News, to which they had responded to Christ.

Especially in the rural areas, many are open to God, and hungry for the Word. Two pastors (right) cycled 45 km to attend a conference.